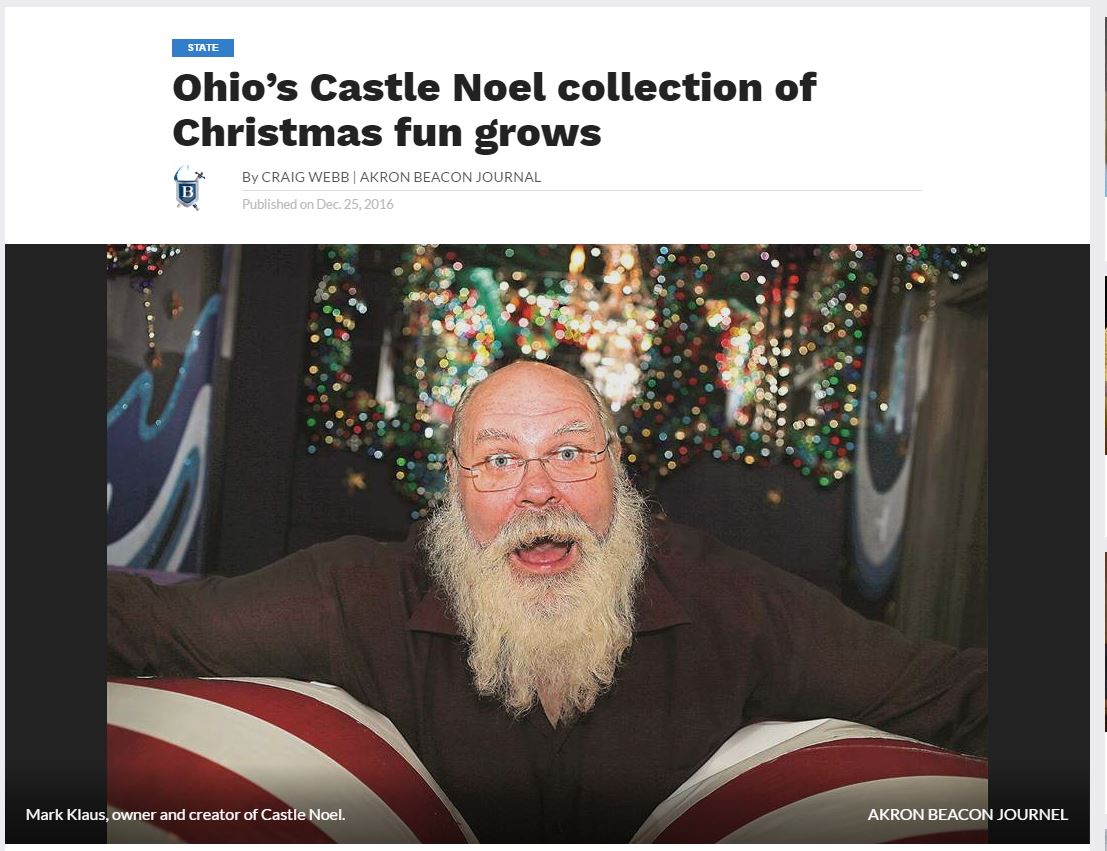 MEDINA — This is not your typical museum.

For one, its owner looks suspiciously like Santa Claus and runs a place dedicated to the holiday from movie props from Christmas movies to original New York City festive department window displays to vintage toys found under the tree.

What makes this place tucked just south of Medina’s historic square particularly special — aside from being chock full of holly, jolly cheer — is that it is constantly evolving.

This Christmas season Castle Noel has a lot of new gifts for visitors.

Guests, who often this time of the year can be found stretched out the door and down the block waiting to get in, will experience a new impressive entrance the museum that just opened.

They still have to venture outside the back door of the storefront gift shop/ticket counter to get inside of the former church turned Christmas museum.

But once outside the door, they catch a glimpse of Cousin Eddie’s original RV from the National Lampoon’s Christmas Vacation.

As cool as that is, collector and museum proprietor Mark Klaus, is more geeked out about the freshly restored giant nutcracker figures he made for Cleveland Ballet back in the 1990s.

When the ballet company pirouetted its way to San Jose, the four 16-foot-tall nutcracker figures bid farewell to their home by the fountains in Tower City.

Mr. Klaus said he fought for years to bring them back to Northeast Ohio.

Two of the giant figures now call the former Halle Building in Cleveland home and the other two have taken up residence in Medina.

The two in Medina — Clara’s toy nutcracker and the Mouse King — are each still in two pieces waiting to be hoisted into place so they will duel over the heads of museum guests as they make their way past the RV and into a new museum entrance.

Once inside, visitors are transported to Santa’s home complete with faux wooden beams — it took Mr. Klaus months of work to get each one just right — as they are greeted by a whimsical mailroom that was part of Macy’s window displays in 2013.

Mr. Klaus said the tall ceilings in one section that give the appearance of being in a castle are adorned with holly and ivy from another New York City window display.

He said the finishing touches are being made to a cool animated cuckoo clock that stands more than 8 feet tall from Lord & Taylor department store that will soon be added to the new entrance area.

Truth be told, Mr. Klaus said, he is constantly stopped by visitors who say they don’t remember something on the tour during a previous visit.

Spanning some 40,000 square feet, Mr. Klaus said, there is a chance they overlooked it on their stop but chances are it is actually something added to the displays.

“This is a labor of love,” he said. “We are here working here seven days a week, year round.”

A good example of this evolving effort is the colorful hallway that is home to Santa’s chimney squeeze.

While guests try to wiggle their way through an inflated chimney, music and lights fill the hallway.

On the ceiling are thousands and thousand of glass ornaments.

Last year there were about 75,000 ornaments, but that number has since grown to around 100,000 as Mr. Klaus works to get the “wow” effect just right.

Considering the ornaments are a part of 150,000 glass ornaments Klaus purchased from a Cleveland company that were used to decorate area malls, office buildings and corporate displays — odds are this display too will grow and change in the coming months.

Mr. Klaus said each ornament is glued and wired to the ceiling one at a time.

There are a lot of things that need repair at Castle Noel and Mr. Klaus and his eager band of elves with some electrical experience are up to the challenge.

Most of the window and store Christmas displays arrive in the workshop in various stages of disrepair.

From missing fingers to water soaked props, Mr. Klaus said, they spend hours and hours restoring each item back to its original glory.

This is particularly true of the store window displays that were designed to “live in the moment” as gifts to the shoppers of New York with no plans to ever put them on display again.

Often they were simply destroyed or dismantled and stored for parts, Mr. Klaus said, before he began negotiating with the designers and stores to preserve them and put them on display at the museum in Medina.

The workshop area where guests are invited to see the restoration effort first hand is being converted into a special event room and will be home to an elaborate 2015 Lord & Taylor window display of a bakery full of Christmas pastries complete with a long conveyor belt of treats.

“People love to see all this stuff and how we put them all back together again,” he said.

There is more to this collection — another warehouse full to the rafters in Medina — still waiting to be unEarthed and restored.

Mr. Klaus — who in addition to running what is billed as “America’s Largest Year Round Indoor Christmas Entertainment Attraction” also handcrafts Christmas ornaments and gifts that have been featured on the Home Shopping Network — love for Christmas started with his dad who would create elaborate displays in the family home.

He said he is always looking for ways to changes things up on the tour from adding some singing Disney-like characters acquired in London to negotiating to be the permanent home to the original TV set for Cleveland holiday legend Mr. Jingeling.

“Castle Noel was never intended to be completed.”