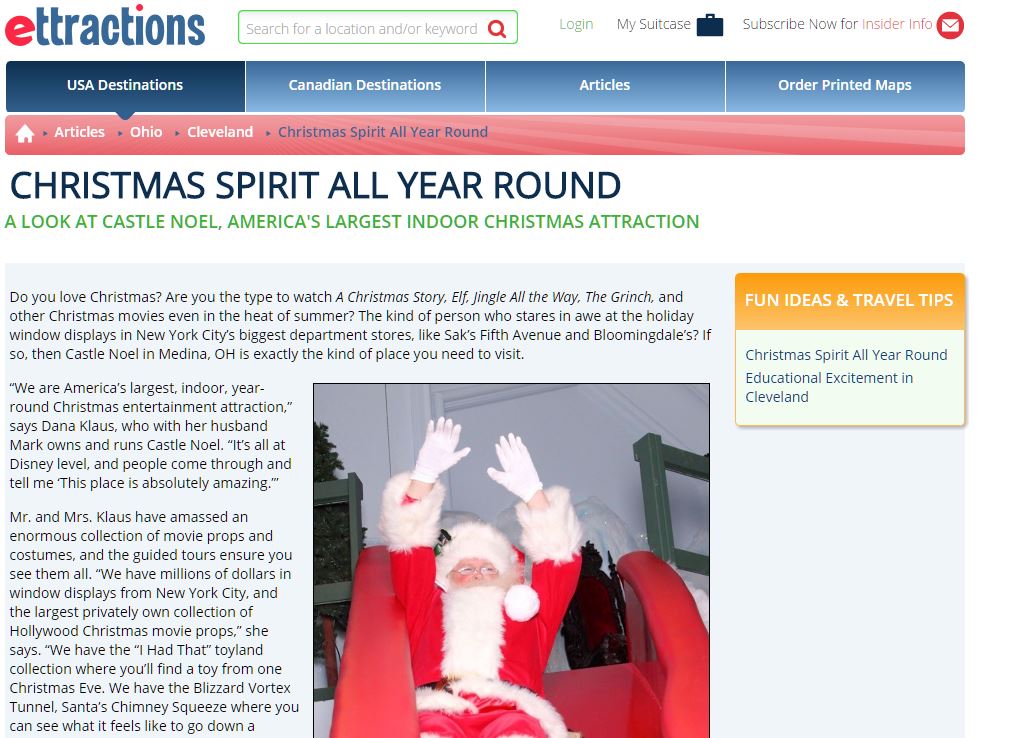 Do you love Christmas? Are you the type to watch A Christmas Story, Elf, Jingle All the Way, The Grinch, and other Christmas movies even in the heat of summer? The kind of person who stares in awe at the holiday window displays in New York City’s biggest department stores, like Sak’s Fifth Avenue and Bloomingdale’s? If so, then Castle Noel in Medina, OH is exactly the kind of place you need to visit.

“We are America’s largest, indoor, year-round Christmas entertainment attraction,” says Dana Klaus, who with her husband Mark owns and runs Castle Noel. “It’s all at Disney level, and people come through and tell me ‘This place is absolutely amazing.’”

Mr. and Mrs. Klaus have amassed an enormous collection of movie props and costumes, and the guided tours ensure you see them all. “We have millions of dollars in window displays from New York City, and the largest privately own collection of Hollywood Christmas movie props,” she says. “We have the “I Had That” toyland collection where you’ll find a toy from one Christmas Eve. We have the Blizzard Vortex Tunnel, Santa’s Chimney Squeeze where you can see what it feels like to go down a chimney like Santa, and Santa Klaus Mountain, which is being transformed into the enchanted forest.” Santa even makes an appearance several times a year, mainly during Christmas and July.

For a uniquely Cleveland experience, you can even ride down the slide on Santa Klaus Mountain. She says, “Come ride the slide like Ralphie, but don’t ask for a BB gun, ‘cause you’ll shoot your eye out, kid.” Even better, three times per year, Drew Hocevar, the actor who played one of the rude elves, comes by to reprise his role. “During Christmas time, you can be pushed down the slide rudely if you ask.”

Don’t think Castle Noel is just for kids, though. Along with the gorgeous window displays and movie props, they have a party room for corporate events, which will certainly put coworkers in the Christmas spirit. And the to date, the oldest person to ride the slide is 101 ½ years old.

But where did it all come from? It’s really all because of Mark Klaus, who’s a well-known sculptor of ornaments and serial merry maker. “The movie props Mark’s been collecting for many, many years,” Klaus says. In the 1990s, Klaus created his first attraction. He is in a constant search to add to Castle Noel. Even before the internet, he was known as “The Santa Klaus Guy,” and it’s gotten to the point where people contact him about props he might like. “I call it Mark’s magic. It’s one of those things where he looks, and reads, and finds that nugget and follows it.” Even the New York City window displays are all due to the relationships he’s built and love of the season. Typically, after the holidays are over, the elaborate displays from Sak’s, Macy’s, and Lord & Taylor are destroyed, but sometimes they’ll let the Klaus’ take them instead. “Mark has built wonderful relationships with the people in New York, and because of his ability as a sculptor, he restores them.”

Mr. and Mrs. Klaus really do embody the goodwill and spirit of the season, going out of their way to ensure everyone can have a good time. In fact, she’s even had people thank her for giving them back their Christmas spirit. “It’s all about making you feel happy and making you feel the magic of Christmas before you leave here.” Having been in a wheelchair in the past, Dana Klaus is especially focused on making sure, no matter your physical ability, that you have fun. “Our attractions are set up for people in wheelchairs.” She once assisted a man in a wheelchair up onto the top of the slide just so he could take a picture with his family, and she gives particular attention to children with Special Needs, telling the guides that they’re her “Gifts from God,” and encouraging them to treat them like honored guests.

They don’t do it for the money, either. “All the money that comes in goes back into the place to make it better and better,” she says. Their motto is “The memories we make are the true treasures of life,” and the two of them have worked hard to make it possible. “Our entire vision is we want to make a memory for our guests. Everybody leaves smiling and giggling and having a great time. We work sixteen hours a day, six to seven days a week just to do that.”

Whether in the dead of winter or the heat of summer, Castle Noel is sure to fill you with Christmas spirit. Klaus says, “We take you out of your world and bring you into ours, and by the time you leave, you feel awesome.” 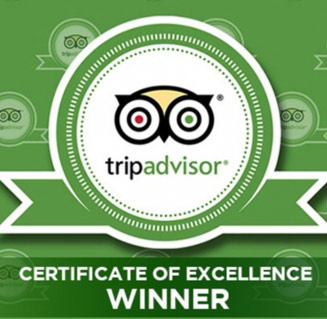